10 Filipina Volleyball Players Who Can Slay As Beauty Queens 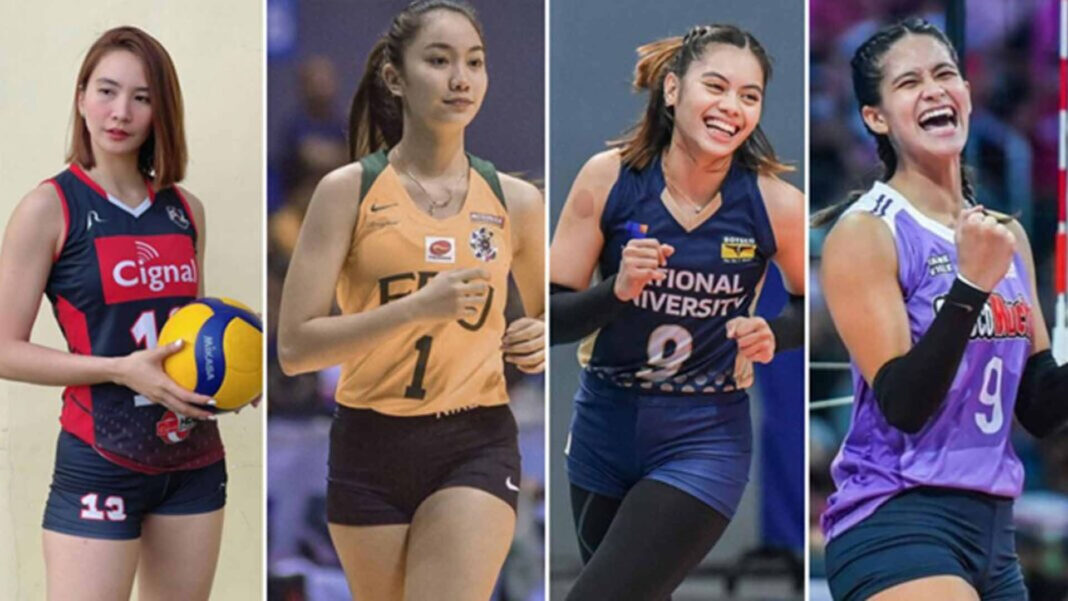 10 Filipina Volleyball Players Who Can Slay As Beauty Queens

Way before, athletes were simply athletes. They just dribble and spike the ball or swim through the pool. However, this time, athletes are slowly becoming celebrities and influencers. From having numerous endorsements to trending vlogs and now even getting tapped for some movies.

With the same amount of fame and love that these athletes have gotten from the fans, similar to artists, celebrities, and beauty queens. Ever wonder what would happen if some of the prettiest volleyball athletes pursued pageantry?

Let’s start with this list of Filipina volleyball players who can pass as beauty queens:

The Lasallian Swag Princess is here. Mika “Yeye” Reyes is a former De La Salle University lady spiker. She played as a middle blocker for 5 years at DLSU, where she took up a Bachelor of Science in Psychology and eventually turned to professional volleyball.

During her stint in the UAAP, she has been recognized as the “Darling of the Crowd” for her towering height of 5’11”. Her Lasallian swag and natural charm keep her on and off the court. Fans are even teasing her for always having the right relationship with her, as fans couldn’t help but look at her eye-catching beauty.

In 2017, Reyes took the role of team captain for the national team of the Philippines. Known for her leadership and wisdom in life, Reyes can surely display her own swag and knowledge in pageants.

Another crowd favorite is Mereophe “Fifi” Sharma. Sharma is currently a student at De La Salle University, taking up a Bachelor of Science in Psychology. She is part of the De La Salle lady spikers and plays as a middle blocker at 5’11”.

Some may not have it all, but Sharma does. She has shared and exemplified her numerous talents through TikTok and Instagram lives with her fans. Sharma is known to have a talent for singing, painting, drawing, and playing the guitar. She even has her own business right now where she sells cute and aesthetic accessories.

Sharma does not simply excel in playing volleyball but is also an academic achiever, making her way as a consistent dean’s lister at the university. With her angel-like speaking voice and undeniably intelligent mind, we wouldn’t be surprised if Sharma ventured into pageantry in the future.

The Ateneo de Manila Blue Eagles has undeniably the biggest fanbase of any sport given. Their championship culture, along with their charming players, has attracted a lot of fans to the team.

One of the charming players that contributed to that is Pauline “Ponggay” Gaston, who has played as an open hitter, utility, libero, and middle blocker. Gaston graduated last 2020 for the program Bachelor of Arts in Interdisciplinary Studies. Currently, she is playing as a professional volleyball player for her club team.

The former team captain of the Ateneo de Manila Blue Eagles surely knows how to make people turn heads. With her morena beauty and 5’10”, Gaston can easily qualify and follow her mother’s footsteps in becoming a beauty queen.

Make way for the Queen of Philippine Volleyball, Rachel Anne Daquis. From 2005 to 2009, Daquis played for the Far Eastern University Lady Tamaraws as an open hitter and graduated from the program with a Bachelor of Science in Business Management.

She has led the team to numerous championship titles. Her alma mater appreciates her efforts in bringing the Tamaraws to a podium finish, resulting in having her jersey number retired in 2017. Daquis further contributed to the growth of volleyball when it comes to the recognition the sport has in the Philippines.

With her height at 5’10”, her charismatic attitude, and personality, Daquis is a possible candidate for beauty pageants given that she has aged like a fine wine.

The future is indeed here. Being one of the leaders of the future of the Philippine volleyball in today’s generation, Nierva has had some experiences representing the country. Currently, she is in her last year playing as a libero for National University, standing at 5’5″ while studying for a Bachelor of Science in Financial Management.

With the intellect and honesty that Nierva has shown throughout her interviews, Nierva can certainly sweep pageant stages too.

Maris Layug is a former University of the Philippines Fighting Maroons middle blocker, standing 5′ flat. She gained attention from the public after going straight to an important game for her club team right after she was called during their graduation rites. Layug graduated from the program with a Bachelor of Science in Hotel, Restaurant, and Institution Management. Even though limited minutes were given to Layug, she surely knows how to show up when needed.

With her doubtless natural Filipina beauty, Maris would never go wrong in trying out the pageant scene.

Simplicity is the new way to achieve sophistication.

Carly Hernandez is a former open hitter and service specialist from Far Eastern University, Lady Tamaraw. Hernandez played for four years only with the team, from UAAP season 79 to season 81. With the pressure that comes within her everytime the coaches put her inside the court to serve, Hernandez remains composed. Even with the limited minutes that she has, Hernandez has contributed to FEU’s defense game. In 2020, she also graduated from FEU with a Bachelor of Science in Business Administration with a major in Business Management.

With the composure that she has on court, there is no doubt that Hernandez can compose herself well in beauty pageants.

An architect and a volleyball player in one. Life goals, isn’t it?

Jessey De Leon is a 5’11” middle blocker who played for the University of Santo Tomas Golden Tigresses before in the UAAP. She gained attention when the netizens knew that she was taking up a Bachelor of Science in Architecture at UST. De Leon took to heart her aspirations in life and eventually became a licensed architect. All while juggling his athlete and architecture duties, she is also exploring the life of a vlogger where she shares life experiences and lessons.

Through her wisdom and perseverance, De Leon can add pageantry as part of her aspirations in life.

Natural charm at its finest!

Lucille Almonte is currently one of the volleyball players for the Adamson Lady Falcons. She is playing as an open hitter, standing at 5’8″. In the middle of the UAAP season 84, her coach converted her into a libero. In which case, she happily obliged and didn’t disappoint. Although there were only a few games where she played as a libero, Almonte showed that she is more than capable of doing it. Currently, the prized recruit of Adamson is taking up a Bachelor of Science in Sports Science.

Almonte has shown her ability to adapt to changes and intelligence, it wouldn’t be a surprise if she will decide to change the path that she is taking and try beauty pageants.

Seth Rodriguez is a former University of the East Lady Warriors middle blocker, standing at 5’10”. In 2020, she graduated with a bachelor’s degree in Tourism Management. Currently, the 24-year-old middle blocker is playing as a professional volleyball player for her club team. She was dubbed as the next Rachel Anne Daquis. However, Rodriguez wasn’t given much spotlight.

Even though she stopped modeling to pursue volleyball, it wouldn’t be a bummer if she tried out for beauty pageants in the future.

Among all these charming volleyball players, who do you think will follow in the footsteps of beauty queen and athlete Michelle Gumabao?