The Universal Peace Federation (UPF), an NGO holding general consultative status with the United Nations, will conduct the One Million Rally of Hope Philippines this weekend. The event will be virtual and is a call for collective prayers for greater hope, peace and solidarity during these dire times.The program is from 3:00-5:00PM (Manila standard time) on Saturday, February 6th. The theme is “One Million People Praying for the Healing of the Nation and the World.” 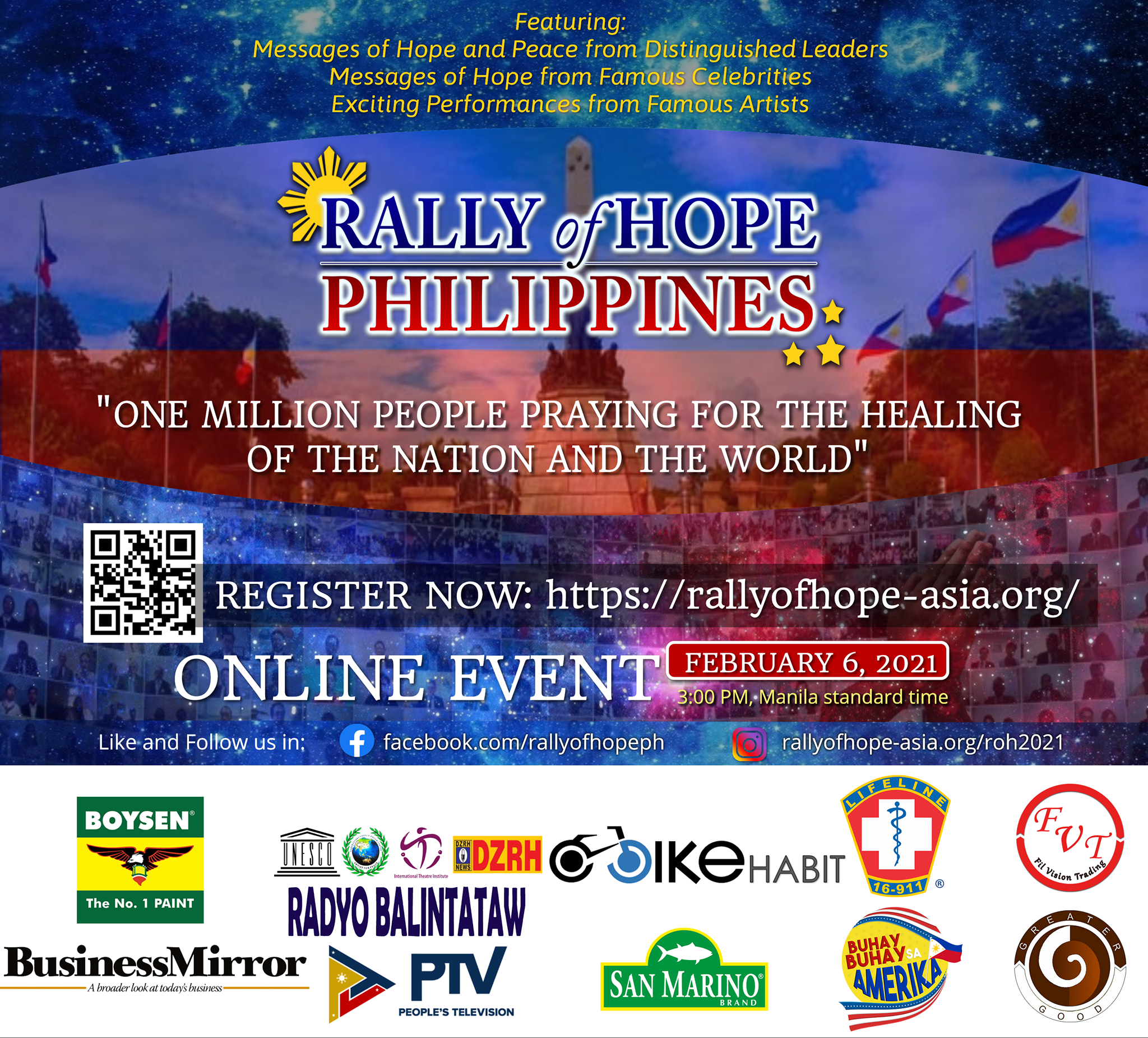 The February 6th Rally of Hope is special insofar as it will gather millions of Filipinos and citizens from around the world online in an interfaith gathering to collectively pray for the healing of the world from the COVID-19 pandemic, raise awareness for the healing of Mother Earth and address climate change issues and for the healing of humanity from divisions to bring about a world of lasting peace for the sake of the future generations.

This event aims also to call on the people to unite in sustaining the help for all the families and communities displaced by the various calamities that swept our nation. Through an online campaign, we intend to rally for more support in order for the typhoon-affected communities to rise again. Another project that will be highlighted in this online event is the campaign to support the “Billion Tree Planting and Growing Project” to be done in partnership with the national and local government units.

A consistent sub-theme of all four Rally of Hope events, as well as UPF’s World Summit series, is that of interdependence, mutual prosperity and universal values. Respectively, it means an economy of parity shared interdependently, a governing system that is transparent and participatory, and a common set values based on the extended family. UPF is committed to abolishing racial discrimination, eradicating poverty and starvation, and ending religious conflict.

The co-founder of UPF, Dr. Hak Ja Han Moon, rightly called the Mother of Peace has been a featured speaker at all Rally of Hope events including this one.

The youth creativity and dynamism will also be featured in a segment called S!NERGY which is a speech competition of students. The winner of the recent Asia Pacific S!NERGY competition organized by the International Association of Youth and Students for Peace, will take part in the online event.

In addition to featuring prominent global leaders, there will be world-class entertainmentfromMr. Jed Madela, 4th Impact, Ms.Gerphil Flores,Reo Brothers, Baliktanaw Dance Company and the Philippine Meistersingers. Messages of hope from famous personalities will also be featured in the online event.

The Universal Peace Federation and its global network of Ambassadors for Peace apply moral andspiritual principles to the tasks of resolving conflict and reconciling the divided human family. TheUPF’s global network is one of the world’s largest and most diverse networks of peace leaders whocome from all walks of life, representing many races, religions, nationalities, and cultures.

The event will be televised and livestreamed by the flagship government station, PTV4. There will also be livestreaming in various social media platforms.

The public may register to attend the rally live at: www.rallyofhope-asia.org or in the event’s official FB page: www.facebook.com/rallyofhopeph