Moving from resilience to renaissance –UnionBank President and CEO

Union Bank of the Philippines (UnionBank) held the seventh iteration of its E-Talk Tales webinar series last December 9, wherein UnionBank President and CEO Edwin Bautista gave an overview of the Bank’s milestones in the past year and how it went from providing help for Filipinos to survive the pandemic to creating a better digital normal for everyone. 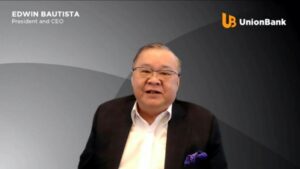 UnionBank made headlines in May this year after being named ‘second most helpful bank in Asia-Pacific’ in the BankQuality Consumer Survey on Retail Banks that was conducted in April.

This helpfulness was evident in UnionBank’s commitment to ensuring that its essential banking services remained accessible and reliable 24/7 during the enhanced community quarantine period, a time when uncertainties ran rampant and the needs of customers could change at any time.

The Bank helped the government in the disbursement of the Department of Social Welfare and Development (DSWD)’s Social Amelioration Program (SAP) cash assistance to 700,000 beneficiaries
amounting to P4.9 billion. It also assisted partner Local Government Units (LGUs) in the distribution of cash or loan proceeds to constituents. 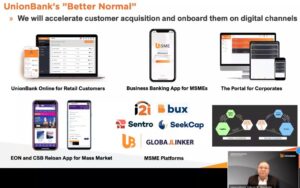 UnionBank has also helped countless micro, small, and medium enterprises (MSMEs) digitize amid the pandemic through its MSME platform GlobalLinker, and through MSME-leaning platforms Sentro, SeekCap, and bux, which are offered by its fintech spinoff UBX. To date, more than 27,000 online shops have already been made using Sentro, SeekCap now has more than 16,000 MSME signups, and bux has over 92,000 users. GlobalLinker’s user base is also now at more than 38,000.
Another sector of society that UnionBank was able to assist especially at the height of the pandemic were teachers, with the help of its thrift bank subsidiary CitySavings Bank. To date, CitySavings has extended a total of P26.1 billion in teachers’ loans, P3.2 billion in motorcycle loans, and 2.9 billion in MSME loans to beneficiaries.

And now, with the worst of the COVID-19 pandemic in the rearview mirror, UnionBank has begun the next major phase in its digital transformation journey, going full-speed ahead from merely displaying its resilience in the face of an unprecedented global health crisis, toward a renaissance in innovation and co-creation.

UnionBank has been a leader in the practice of the agile methodology, which enables the Bank to react quickly to any situation and achieve innovation at a much faster rate. But the Bank knew it had to become much faster. So, to do this, the company started migrating to an even faster way of working: DevSecOps. 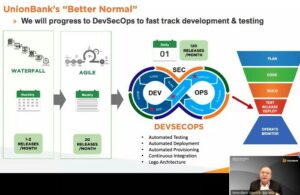 Short for “development, security, and operations,” DevSecOps is an ideology that aims to integrate security into every stage of the development-deployment cycle. With this new methodology, the Bank has been able, among other advantages, to test new features that they develop much faster and deploy the said features on an almost real-time basis. Moving forward, DevSecOps will play a key role in the creation of new services for the Bank.
Aside from DevSecOps, another key element of the Bank’s digital renaissance is data science and AI. This will be implemented across various verticals within the Bank, from mobile banking to credit, from algorithms to operational enhancements, among others.
“This is really the time wherein, together we can usher in a renaissance in the area of banking and technology. It’s an area where the Philippines can not only be a fast follower, but can actually be a trailblazer in the banking world,” Bautista said.
To know more, visit their official pages:
Unionbank of the Philippines at https://www.unionbankph.com/, UBX at https://ubx.ph/, Unionbank GlobalLinker at https://unionbank.globallinker.com/login, and CitySavings at https://citysavings.com.ph/.